In February 2014 Creation Gallery G8 held the first “Illuminating Graphics” exhibition introducing the diverse modes of expression and approaches used by creative artists amid the media shift, from paper to the digital realm, in how works are appreciated. In that exhibition, the works of 15 graphic designers and digital creators were displayed on illuminated monitors of uniform size.

For “Illuminating Graphics 2,” the exhibition area will be divided into two zones—one real (physical) and the other 3-dimensional (digital / virtual)—and the artists’ works can be appreciated in both. The real zone will display posters, paintings, photographs, video images and the like; in the 3D zone, the visitor will view space and works in digitalized (illuminated) form.

Today, the boundaries between reality and virtuality are increasingly disappearing amid advances in digital technology and changes in the Internet environment. The gallery hopes to make this an exhibition that enables visitors to experience where the “original” of a work exists and how graphics exist when respectively placed in both real and virtual spaces. 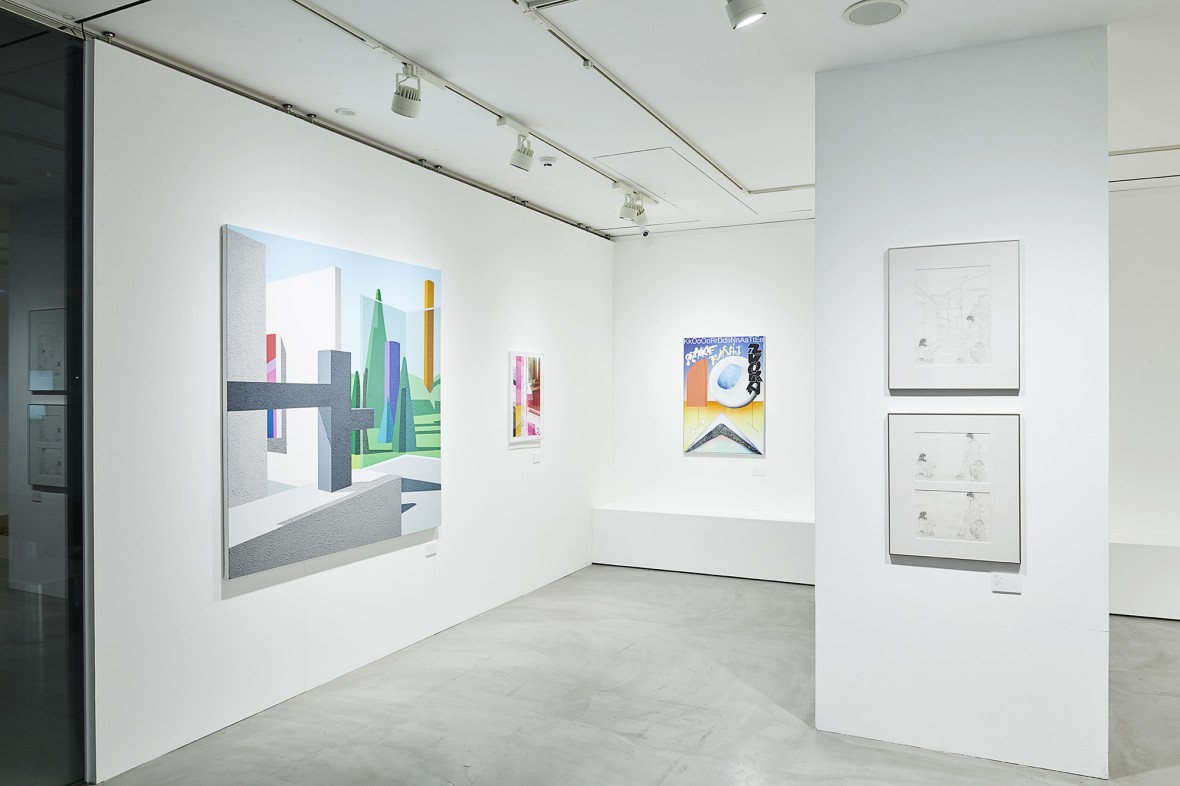 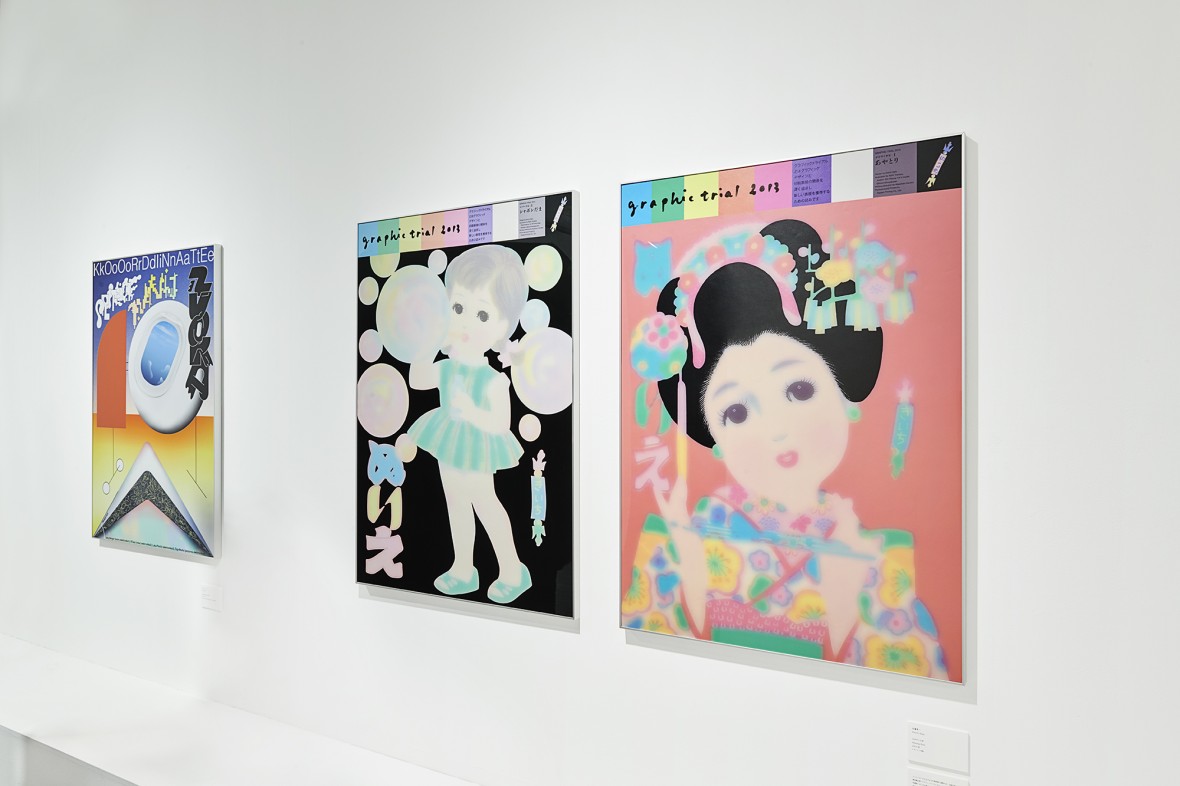 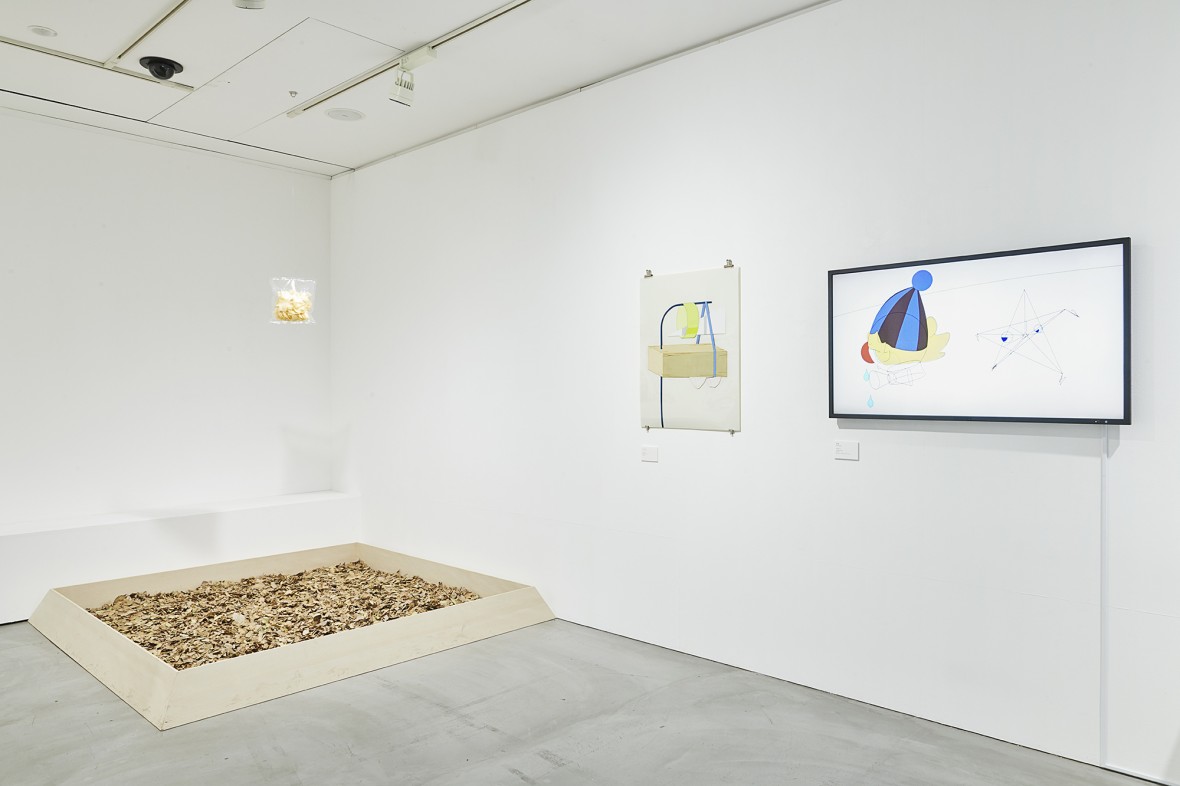 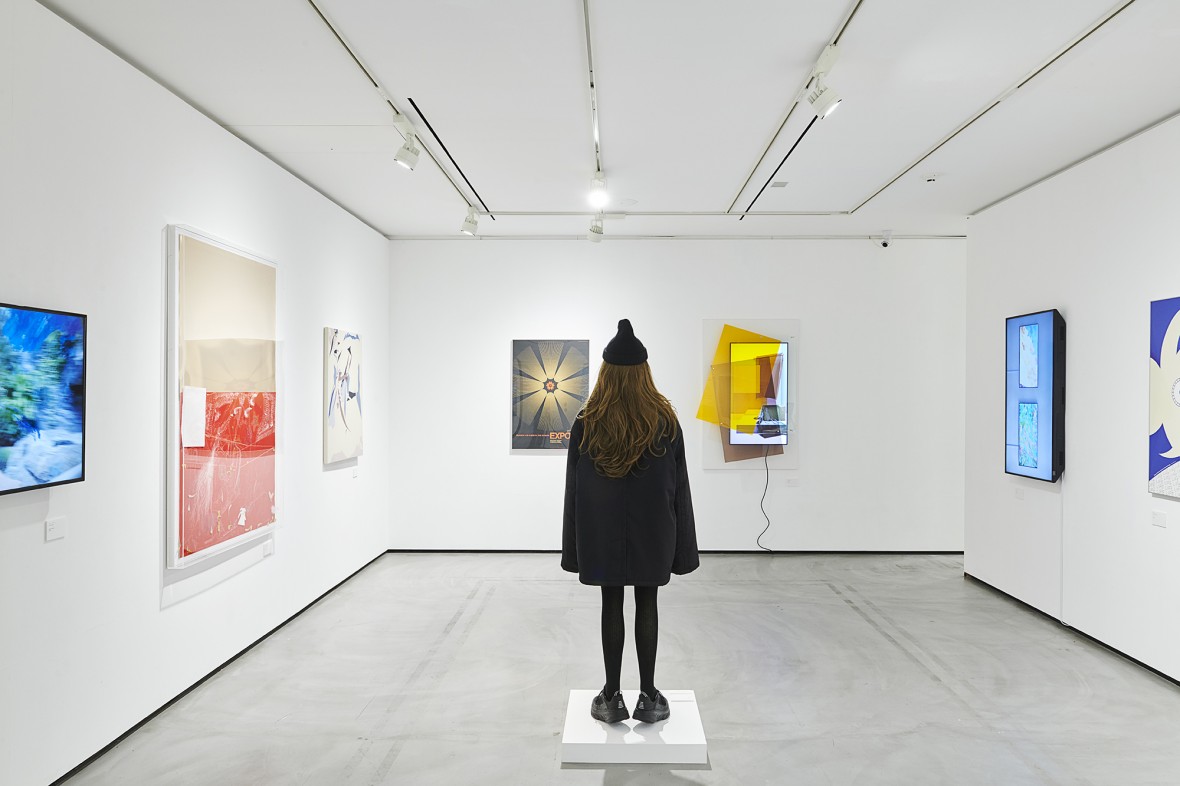 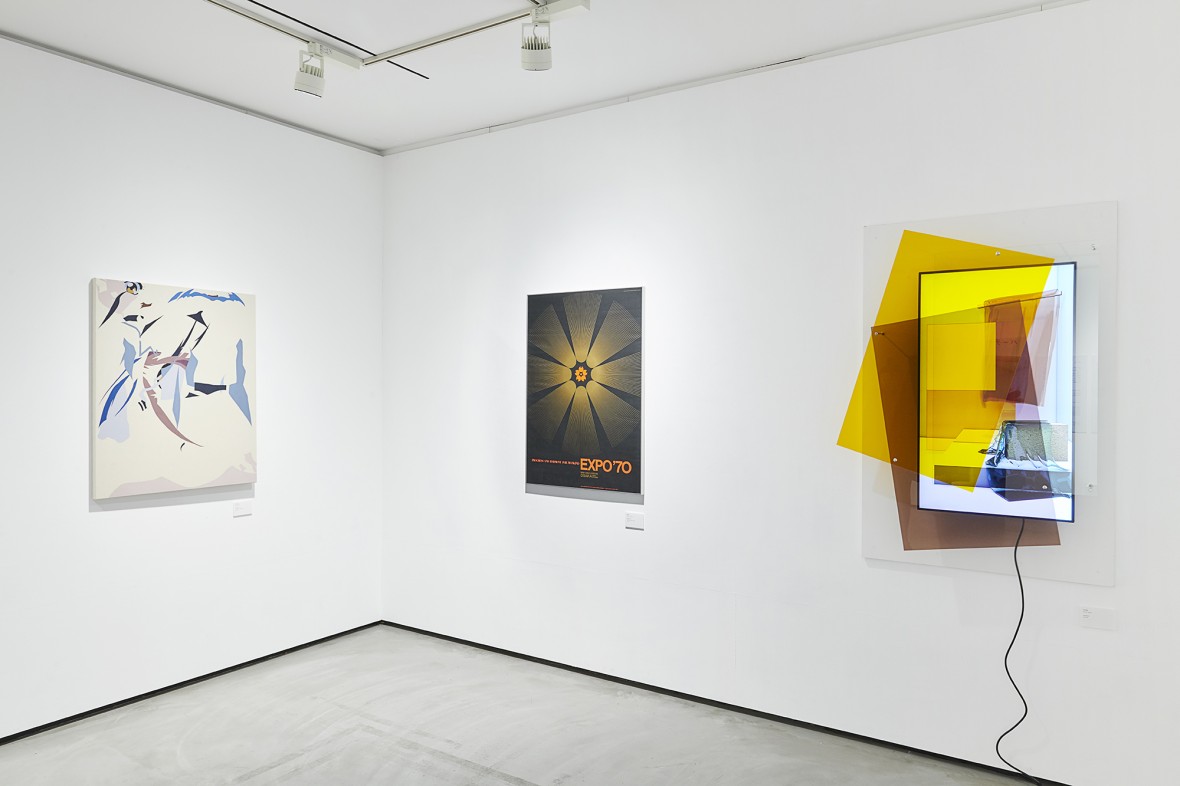 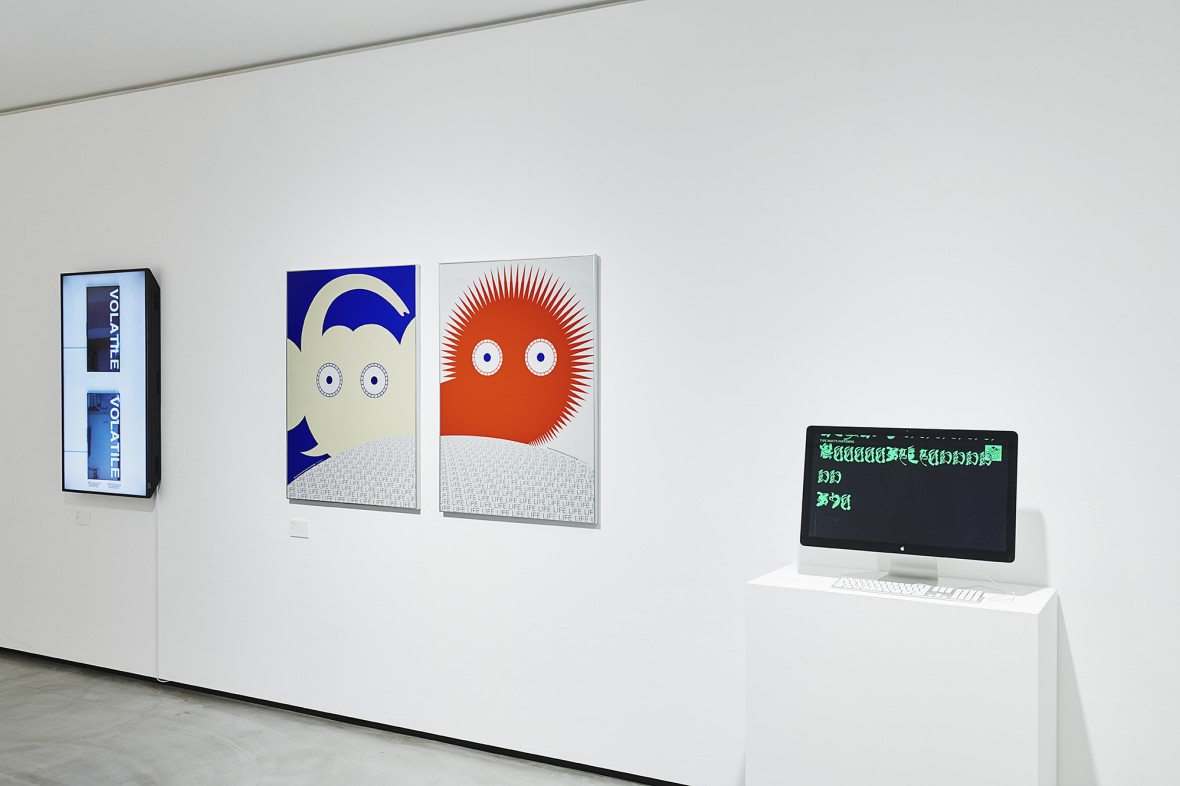 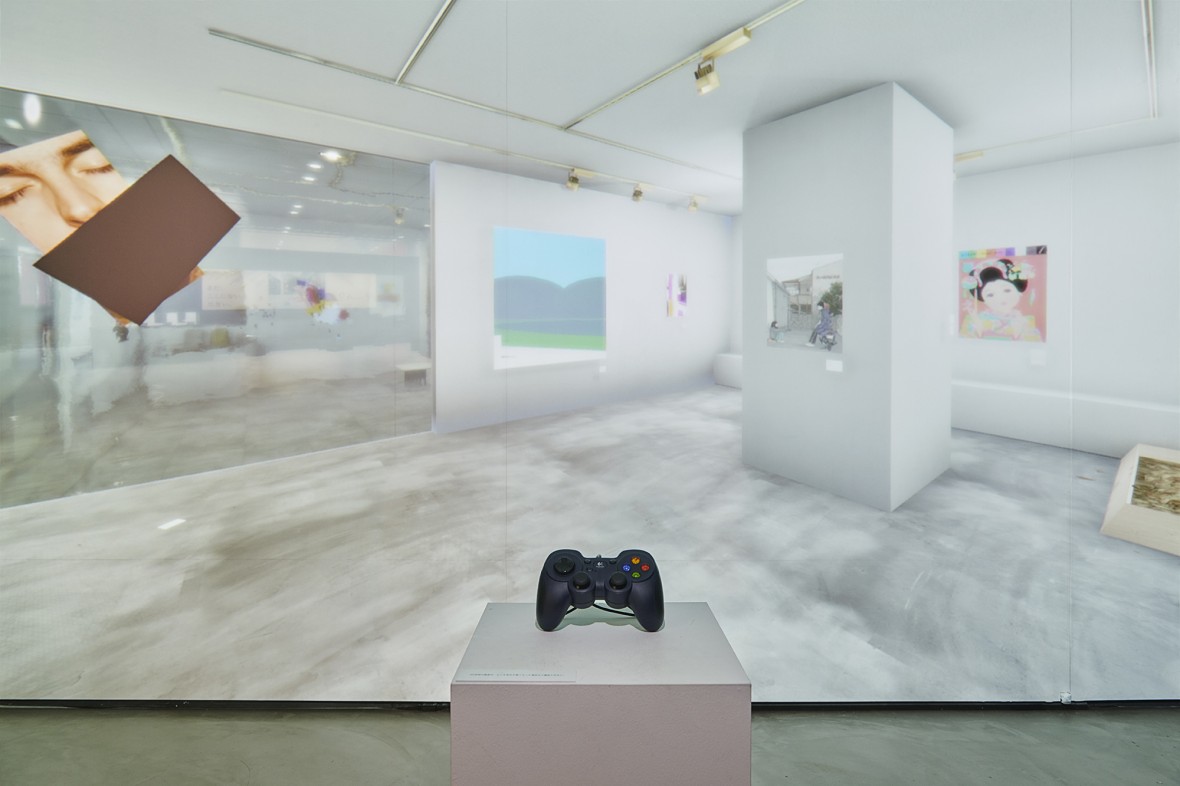 The first “Illuminating Graphics” exhibition took place in 2014. On that occasion, graphic designers and digital creators were requested to create works of a common format: works of uniform size that illuminate on a monitor or light box. The works were displayed without differentiation.

For “Illuminating Graphics 2,” my idea was to focus on real and virtual space. The exhibition layout will feature posters, paintings, photographs, videos and other works which we either selected or commissioned. The exactly identical exhibition space will be made in 3D space, enabling the visitor to appreciate the same works in both real space and 3D space. The system for viewing works in the 3D space will be made with the cooperation of artist Akihiko Taniguchi.

In recent years, the boundaries between reality and the online realm have diluted further, and their hierarchical relationship too has become opaque. As that has evolved, the view as to what constitutes the “original” work has come to be determined individually by each artist, and with an increasing volume of works, their “original” form does not necessarily exist in real space. Variety is a good thing but, partly owing to the difficulty of critiquing different formats on equal terms, I think the relationship between the two has begun to weaken.

For me, as one who delves primarily in the digital media, my interest in graphic design is visual expression, and I believed it was difficult to critique digital works that are creative in terms of their supporting system or structure. However, through dialogue I acquired a sense of the advanced level of establishing expressive issues. I also became aware of my own immaturity, in terms for example of my ability to decipher various things from visual information.

What I have intuitively learned from that lesson is that even if expression is evolved according to the criteria set by each genre, this doesn’t give birth to diverse creation. That is because I believe the ideal diversity is the simultaneous existence of works that are meticulously designed paying consideration to the characteristics of the given medium of expression—posters, digital signage, web, etc.—and works of diverse media that are readily connected by the impact of one given visual. 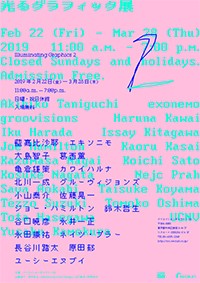 Saya Aokabi
Born in Shizuoka Prefecture in 1997. Currently studying Painting in the Department of Fine Arts of Tokyo Zokei University. Aokabi creates in two dimensions based on her personal landscapes. To date she has participated in group shows including “DEPTH OF FLATNESS” (2018, THE blank GALLERY), “RED HOUSE” (2018, TALION GALLERY), “Solaris’s Bar” (2018, the CAVE), and “Sturm Sturm!: zenmetu suru” (2017, Genron Chaos Lounge Gotanda Atelier).

exonemo
Art unit composed of Kensuke Sembo and Yae Akaiwa. They launched their creative activities on the Internet in 1996. Starting in 2000, they expanded their scope of activities to include installations and performances in real space, organization of events, etc. In 2006 they won the Golden Nica (highest award) in the Net Vision category at Prix Arts Electronica, a media art festival of global renown. In 2010, together with more than 10 other members, exonemo formed the “secret society” IDPW and began holding events, such as “Internet Yami-Ichi,” in Japan and abroad. Since 2015 the unit is based in New York.

Tomoko Oshima
Illustrator and visual artist. In 2010 Oshima began posting her illustration-based “gif” illustrations on Tumbir. Her major artworks to date include music videos, CD jackets, etc. for Izumi Macra. She has published two books: Less than A4 and Secchan.

Yusaku Kamekura
Graphic designer, born in 1915. Kamekura joined Nippon Kobo in 1938 and participated in founding the Japan Advertising Artists Club in 1951. In 1960, he was a founding member of Nippon Design Center, and in 1962 he established Kamekura Design Office. He received the Asahi Prize, Mainichi Arts Award and, from the Japanese Government, the Medal of Honor with Purple Ribbon and designation as a Personal of Cultural Merit. Kamekura was inducted into the New York ADC Hall of Fame and received an Honorary Doctorate from the Academy of Fine Arts, Warsaw. He died, of pneumonia, in 1997. His representative works include posters for the 1964 Tokyo Olympics and 1970 World Expo in Osaka, and the logomarks and logotypes of “Good Design,” NTT and Nikon.

Haruna Kawai
Artist. Using the same technique as in animation cels, Kawai depicts real objects transformed to unique three-dimensional objects in her works. She is interested in how objects are composed.

Issay Kitagawa
President of GRAPH, born in Kasai, Hyogo Prefecture, in 1965. Kitagawa graduated from the University of Tsukuba in 1987. He is a member of AGI (Alliance Graphique Internationale) and serves as a judge for the New York ADC and D&D awards. He himself has received numerous awards, including Tokyo ADC, Tokyo TDC and JAGDA New Designer awards. In 2016, Henn-na Hotel, for which Kitagawa oversaw naming and branding, was listed in the Guinness World Records as the first hotel staffed by robots.

groovisions
Design studio based in Tokyo. Originally formed in Kyoto in 1993, groovisions first garnered attention through its stage visuals for PIZZICATO FIVE. After relocating to Tokyo in 1997, the studio has engaged in diverse design areas, with a core focus on graphics and motion graphics. In 1994 it developed the character “Chappie,” for which it also performs management duties.

Taisuke Koyama
Photographer, born in 1978. Having experience in studying biology and natural environments, Koyama creates works that explore image-making possibilities in the post-digital age from a scientific perspective and using experimental production methods. The diversity and fluidity of images converted using repetitive algorithms are the themes underlying his endeavors, which aim to update the history of photography and give birth to diverse perspectives in contemporary society. They are an important element of Koyama’s experimental approach to photography.

Koichi Sato
Graphic designer, born in Takasaki, Gunma Prefecture, in 1944. Sato graduated from Tokyo National University of Fine Arts and Music with a degree in Visual Design. After initially working in the advertising department of Shiseido, he went freelance in 1971. He won a Tokyo ADC Award (First Prize) in 1985, Mainichi Design Award in 1991, and the Education Minister’s Art Encouragement Prize for young artists in 1998. He also won numerous awards at international poster competitions, include at the New York Museum of Modern Art (MoMA) in 1988. Sato died in May 2016. His works are included in the permanent collections of many art museums worldwide, as well as Tama Art University.

Joe Hamilton
Joe Hamilton is an artist who makes use of technology and found material to create intricate compositions, in video, sculpture, print and digital media. His work is concerned with the impact of technology on our experience of landscape as well as subjects including image culture, infrastructure, architecture and geopolitics. Joe’s work has been exhibited at museums and galleries around the world. http://www.joehamilton.info/

Tézzo Suzuki
Graphic designer, born in Kanagawa Prefecture in 1989. After graduating from Tokyo University of the Arts in 2013 with a concentration in Design, Suzuki initially worked at Kengo Kuma and Associates. In 2015 he completed the TypeMedia Master Course at KABK: Royal Academy of Art in Den Haag, the Netherlands. www.tezzosuzuki.com

Kosuke Nagata
Born in Aichi in 1990. Currently studying for a PhD degree in the Graduate School of Film and New Media at Tokyo University of the Arts. Nagata’s focus is on technical and systemic mechanisms that are used to achieve works or exhibits but which are themselves considered peripheral: for example, image processing software used to create photos, computers and monitors used as image reproduction equipment in exhibition spaces, and captions and audio guides that augment the appreciation of exhibits. Nagata creates by manipulating or rearranging the relationship between such things and the works themselves. His major exhibitions, both held in 2018, include “Open Space 2018: In Transition” (ICC) and “The 10th Yebisu International Festival for Art & Alternative Visions: Invisible” (Tokyo Photographic Art Museum).

Nejc Prah
Nejc Prah is a Slovenian designer living in New York CIty. He has an MFA from Yale and works at Bloomberg Businessweek. He is a member of Ansambel.

Tota Hasegawa
Born in Tokyo in 1972. After completing an MA degree at the Royal College of Art (RCA) in 1997, Hasegawa initially worked at Sony’s Design Center and Sony CSL Interaction Lab. Then in 2000 he joined the creative group tomato, based in London. Hasegawa’s output is remarkably varied, spanning from interactive advertising to original rakugo (storytelling). Since 2011 he has been Executive Creative Director at Wieden+Kennedy Tokyo.

Iku Harada
Born in Yamagata Prefecture in 1982. In 2007 Harada completed the graduate course in Painting at Tokyo Zokei University, and in 2009 he began releasing his works. He creates fictitious realms, with houses and objects, inside his computer, and here he depicts simulated scenery as paintings. Harada’s most recent solo shows include “New Dimensions” at Art Front Gallery (Tokyo, 2018) and “Transposing Fragments of Memory to Maps“ at museum shop T (Tokyo, 2018).

UCNV
Programmer and artist. UCNV develops programs that damage computer images and video files, and uses them to create his works. https://ucnv.org/