This year’s CREATION Project invited designers to collaborate with Mobby Dick Inc., Japan’s leading producer of wetsuits for marine sports, in the creation of small hand pouches. Mobby Dick is located in the port city of Ishinomaki in Miyagi Prefecture, a city with a vibrant wetsuit industry.

In 2013 Mobby Dick is celebrating its 50th year in business. The company began as a supplier of diving equipment to the local fishermen, but today its operations center on the production of custom-made wetsuits. In the Great East Japan Earthquake of March 2011, Mobby Dick suffered the loss of its warehouse in the tsunami, along with the total loss of an affiliate’s factory, but it moved swiftly to resume operations at its headquarters and factory. The company has also been greatly supportive of efforts to revive local enterprises, as illustrated by its creation of employment opportunities by hiring residents of temporary housing to make various fashion accessories using fragments left over during the production of wetsuits.

For CREATION Project 2013, creative artists were invited to design original hand pouches to be manufactured by Mobby Dick from material used in making wetsuits. In the same way a wetsuit protects its wearer when diving, the rubbery material offers outstanding waterproof and cushioning properties to protect its contents against water intrusion or shocks.

The exhibition will feature 180 petit pouches designed by 180 artists, from young and aspiring designers to recognized leaders in the design field, from both Japan and abroad. The items on display will be available for purchase (for later delivery) at a uniform price of 5,000 yen (tax included) apiece. Every article will be handmade, with part of the production process consigned to victims of the earthquake and tsunami who continue to live in temporary housing.

In this way, every item purchased will provide work for people living in the disaster region. Proceeds from the project will be donated to support children from the affected zone. We earnestly hope as many people as possible will take this opportunity to support this worthy charity event.

We are extremely pleased to have been invited to participate in CREATION Project 2013. Needless to say, our business is made possible thanks to the support of our employees and the local community. Roughly half of our employees sustained damage in the disaster of 2011, the effects of which extended to both their physical and mental wellbeing. The local community suffered damage on immeasurable scale. Protecting our employees and our local community was not done as an act of charity, but as a necessity in order to keep the company going. Day after day, I encouraged everyone to never give up, that giving up was not an option. This “Little Handbags from Ishinomaki” event instills us with courage, and every pouch will be made by our employees with pride and joy. I wish to express our sincere gratitude to the creative artists and everyone else who have in any way cooperated in this project. 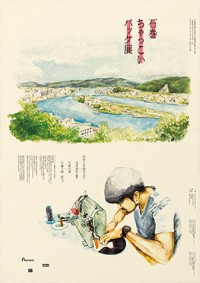