In the aftermath of the Great East Japan Earthquake of March 2011, self-help facilities for people with disabilities suffered a dramatic decrease in work available to them. The disabled face significant challenges if they leave places or surroundings they are familiar with, however; so they have had no alternative other than to remain and wait for work to return. This is the situation even today, almost four years after the disaster.

This year’s CREATION Project was conceived in response to the plight of these individuals. A total of 187 creative artists generously agreed to participate by designing a cover of a Japanese-style notebook, with disabled people hired to perform the binding work. The result is the remarkable collection of notebooks to be exhibited at Recruit’s two galleries.

“Japanese-style” notebooks feature a traditional method of binding, by thread, unique to Japan. Whereas such notebooks were once the norm, advances in digital technology in recent years have resulted in “modern” notebooks produced in mass volume for mass consumption, and Japanese-style notebooks are now seldom encountered. For this project, the disabled people of Tohoku were given instruction in the traditional binding method in the hope that acquisition of this skill will lead to a productive future for these individuals.

To design the notebook covers, we received the generous participation of 187 creative artists – from those just starting out to those at the highest pinnacle of their fields – who devoted their talents to the project free of charge. The cover paper is “b7 Bulky,” developed and manufactured by Nippon Paper Industries’ Ishinomaki Mill. The mill is located in the city of Ishinomaki in Miyagi Prefecture, one of the hardest-hit areas affected by the 2011 earthquake and tsunami. “b7 Bulky” was developed one year after the disaster struck, as recovery work was hitting stride.

In the two exhibition venues, the 187 specially designed Japanese-style notebooks will be on show and on sale. We hope as many visitors as possible will purchase a notebook – both for the contribution it will make to giving work to the disabled in Tohoku, and for the pleasure to come from using a notebook in Japan’s traditional style.

Proceeds from the project will be donated to support children in the disaster region. We earnestly hope as many people as possible will take this opportunity to participate in this worthy charity event. 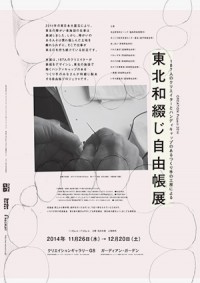